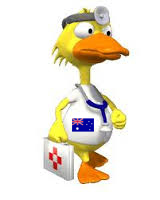 Kinergetics is a purported type of energy healing. Like kangaroos, it is mostly limited to Australia. It also hops all over the pseudomedicine landscape, incorporating applied kinesiology, thought field therapy, intuitive healing, and therapeutic touch.

Kingertics.com describes the technique as “fast, painless, and natural.” It is certainly fast, as patients shell out $140 for a six-minute session. It is indeed painless, as you are touched by no equipment and receive no injections or other medicine. With regard to the final claim, the site notes that kinergetics uses “the body’s natural healing energy.” Left unexplained is why you would need a practitioner since the body is naturally healing itself.

Like most pseudomedicine, kinergetics makes vague, wide-ranging clams. In this case, they are the most extreme I’ve come across, as it can cure ALL disease and sickness. In a technical sense, it isn’t claiming it will cure measles or chronic fatigue syndrome specifically, but it will unblock the energy flow that is causing these maladies. If the person isn’t cured, another unblocking attempt is needed (and paid for). Typical in the alternative medicine field, any seeming successes are proof of it working, while any failures are due to the patient lacking the proper energy field, harmony flow, or chi balance.

Not everyone doing kinergetics will make claims this broad since there are no prerequisites or education required and, hence, no standards. Practitioners can throw in whatever techniques or terms they want to. One video shows a practitioner whose main tactic was doing what the patient’s shoulder muscles told him to. Other times jaw muscles are used, as the patient will explain what they think they need, and the practitioner will gladly go down this path to a self-fulfilled healing prophecy.

Kinesiology is the study of human movement and is a legitimate field. But in this field, out in left with a hockey stick, is applied kinesiology. It holds that measuring muscle resistance will determine the health of organs and identify nutrient deficiencies. There are at least a half dozen peer-reviewed studies debunking this idea and none that support it. As such, some kinergetics practitioners downplay the muscle claim and highlight that it clears up chi blockage, which appeals to New Agers.

Thought Field Therapy holds that negative emotions cause energy blockage and that removing this block through acupressure points will make the fears go poof, bye-bye. Skeptic Monica Pignotti conducted a controlled experiment in which patients were touched where the therapy says they should be, while other patients were touched in random areas. Both groups reported excellent results, indicating it was all the power of suggestion.

Intuitive healing and therapeutic touch are both based on the idea that you can move your hands all around to do medical magic. They target ideas that can never be tested, such as aura imbalance, chi blockage, and energy misalignment. They rely on confirmation bias, communal reinforcement, and wishful thinking. They also thrive on the regressive fallacy, which is the failure to take into account natural fluctuations when ascribing causes to situations.

The website makes the astounding claim that at the root of all illness and disease are energy imbalances. Practitioners offer no definition of what an energy imbalance is, other than to employ the circular reasoning that illnesses are a sign of it. Your uncle’s pancreatic cancer? Not excessive cell growth, but a lack of harmony in his energy rhythm. That nasty cough you can’t get rid of? Unrelated to your cubicle mate who also had it; your emotional flow needs corrected.

The website makes claims such as this one with no evidence and no definition of unfamiliar terms: “The human body is like a house that is constantly being rebuilt to an energetic plan. If this plan becomes damaged in any way, the body cannot rebuild itself in a healthy manner.” That’s right, folks, we homo sapiens have no immune system, but we’ll build one for you.

Competing for the site’s most hyperbolic point, we have this beauty: “The body stores all memory of everything we have ever done, seen, or experienced.” This site would have you believe you know what you had for lunch on Feb. 1, 1985, and can recall every line of alternative medicine tripe you’ve ever come across.

Going on it reads, “When dealing with allergies it has been found that there may have been a substance present at the time.” Yes, that would be an allergen.

It then lapses into a rare point of accuracy with, “Have you ever heard a song or smelt something that has bought back memories to you? The body is accessing memory associated with these sounds or smells.” After piggybacking on a legitimate point, into segues into this gobbledygook: “In the same way that the body accesses memory associated with a substance, it will react in an unpleasant manner if the original experience was unpleasant.” Instead of seeing an allergist, come to us and we’ll block the negative energy flow.

For evidence of the field’s efficiency, the website cites 300 anonymous testimonials, which is 300 more than the number of medical studies it references.