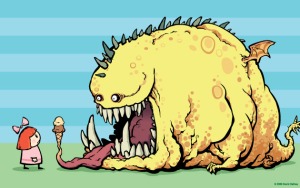 This month, Judge Kathleen Watanabe sentenced a Hawaii man to one year of probation and fined him $200 because his son walked a mile home from school. He also has to attend a parenting class for being convicted of endangering a minor’s welfare.

Now in my day, sonny, we walked a half mile to and from school every day, much of it up a steep hill, with no coat, in 10-degree weather. This is actually true, although the coat-free trek was optional, as I had one, but dragged it home in the snow. I also put my wool cap away and arrived home with my ears as red as the Chiefs coat I was dragging.

In her sentencing, Watanabe allowed that children once walked long distances to school. But, she said, it’s different today, with dangers like more cars and child predators. I have no information on Pacific Island traffic patterns, but with regard to child predators, the judge is greatly mistaken. She’s not alone. I bemoaned that my oldest child, a 7-year-old boy, isn’t traipsing the neighborhood on foot and bike, going to friends’ homes and tree houses, and playing on creek banks, like I did at his age. My mother said this was a good thing, and she cited the same beliefs as the judge.

But these are fears, not facts. There has been a 35 percent decrease in juvenile homicides since I dragged my coat home in the snow. I can’t blame the judge or my mother for thinking otherwise. With dozens of 24-7 news sources in competition, any missing child is going to be publicized. It’s simply much more reported today. Interestingly, that technology also makes it more likely the child will make it home safely. Cell phones, Amber Alerts, and social media have all played roles in children being recovered and kidnappers being arrested.

Beyond the drop in crime targeting juveniles, there have been improvements in health care, food sanitation, and automobile safety. Child labor in the U.S. went away 100 years ago. These factors combine to make today in the developed world the safest time in world history to be a child.

This is seldom pointed out, nor is the panic new. Despite my mother’s insistence that things are worse now, she thought they were plenty bad back in the day. In a well-meaning but frightful tactic, she plied me with stories of youth who were abducted and abused by strangers. An inordinate number of these horrors seemed to take place in public restrooms. I don’t think anyone was killed in these terrifying toilet tales, but they were harrowing enough that I was in junior high before I felt OK going into one. Sometimes my mother would ask me to accompany my little brother into a restroom. HELL NO! This would make her angry, as she remembered what supposedly went on in there. She never seemed to make the connection between her telling me these stories and my reluctance to enter such locales.

This is not the usual type of subject for my blog. Whereas Reiki practitioners, mediums, and astrologers are always fraudulent or self-deceived, Stranger Danger is sometimes a terrifying reality. The reason I’m addressing it is to point out four ways that Stranger Danger is misapplied. The first has already been mentioned, as numbers show that juvenile abductions and murders have declined significantly in the past four decades.

The second myth is that strangers pose the most danger to children. In most years, there are about 250,000 minor abductions, of which only about 100 are by strangers. The overwhelming majority are by family members or supposed friends. From a purely statistical standpoint, a stranger is the safest person for a child to be with.

The third issue is the inconsistency with which many parents apply safety lessons. Only three percent of juvenile murders are committed by strangers and the chance that any given child will be killed by a stranger is one in 5 million. It is hard to relay these messages effectively to people because, by using “only” or “just” in conjunction with the most emotional topic possible, the speaker comes across as insensitive. This causes the listener to double down on their beliefs, and that’s partly why these myths continue.

The usual response is that these numbers are irrelevant if your child is that one in 5 million. This is true, but there are still inconsistencies because other dangers are not regularly stressed. Children are also killed by lightning strikes, but most parents have not instructed on lightning safety. I have, by the way, had the lightning talk. And to be clear, my children have also heard the stranger talk. I don’t want to leave the impression that I would be OK with my children jumping into a car with an unknown person wielding a candy cane. We’ve had that conversation and have plans in place to prevent the scenario from occurring. But I had the talk and made the plans while recognizing the unlikelihood.

When I was dragging that coat home, there were Block Mother signs in some windows along the route. Children lost or otherwise in peril knew they would find harbor there. In other words, we were taught to talk to strangers. This is the final, most ironic point: That lost children should be encouraged to talk to strangers, preferably a police officer, firefighter, or even a letter carrier. If none of those are sighted, a lost Kindergartener is still more likely to get back safely if they ask a stranger for help instead of navigating their way through traffic, weather, rivers, and railroads. This should be done as a holistic approach that includes measures taken to minimize the chance of that 5-year-old ever being lost, and they should have phone numbers and addresses memorized. Following these methods are far more efficient than perpetuating the Stranger Danger myth to children and adults.