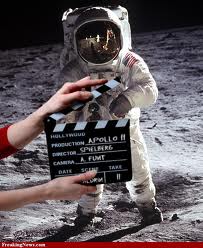 Landing on the moon is a source of national pride for 90 percent of Americans. It is a source of personal satisfaction to the other 10 percent, for whom seeing a hoax in it is preferable to celebrating mankind’s greatest accomplishment.

While mostly a fringe moment, the idea has been endorsed by the Fox Network and that greatest of modern astrophysicists, Whoopi Goldberg. The most frequent protest focuses on an allegedly waving flag. It is pointed out the moon has no atmosphere and no wind. But the flag is not waving. The creases in the flag were due to it having been folded during the trip, and the only time it moves is when it’s touched. After this touch, the flag takes much longer to settle than it would on Earth, due to the lack of atmosphere critics had been so fond of addressing.

Another argument centers on the Van Allen Belt, where Earth’s magnetic field intensifies solar radiation. Critics say a trip through the Van Allen Belt could never be survived. But this would be like arguing that an X-ray would be fatal. A two-second exposure to an X-ray is fine. A two-hour exposure would not be. It would take at least a week of hanging out in the Van Allen Belt doing astronaut stuff for someone to be killed.

Conspiracy theorists gleefully note the lack of exhaust flames when the astronauts began their return trip. But this is because the propelling agent was a mixture of nitrogen tetroxide and Aerozine 50, which produces transparent gas.

The lack of stars in the background is also raised. Having passed a freshman-level photography class, I know that shots taken with a fast exposure and small aperture fail to capture faint objects on a dark background.

A couple of more arguments focus on a Hollywood explanation. Critics think that shadows from objects going in different directions indicate multiple light sources. However, if there had been multiple light sources, the astronauts and equipment would cast more than one shadow. The shadows go in multiple directions because they are distorted by a low sun and uneven surface. Keeping with the movie studio theme, propononets of the hoax theory point out a supposed letter ‘C’  on a moon rock, and claim this is a stage prop. However, the letter isn’t on the original NASA negatives or prints, and is a hair or fiber that got onto a reproduction.

Still another claim is that since moon dust is dry, it wouldn’t take a boot imprint, much as how dry sand won’t take prints. But moon dust is unlike sand. Its particles have different sizes and shapes. Its more like talcum powder, which does take prints when dry.

Perhaps the laziest point is wondering how a photograph of Neil Armstrong could have been taken unless someone was standing there to snap it. The shot was taken on a still camera mounted on the Eagle lander. Moreover, remote cameras left on the moon snapped the departure. These were relatively well-known facts at the time and even the most superficial investigation would have revealed this answer.

Frustrated by these refutations, moon landing hoax proponents will resort to challenging NASA to end the supposed controversy by having the Hubble Space Telescope take photos of equipment left behind. But all that’s left is the 12-foot wide Eagle lander, much too small an object to be captured. And even if it could be photographed, the idea that it would silence hoax proponents is itself a hoax. Conspiracy theorists, by their nature, consider any contrarian evidence to be part of the conspiracy.

For instance, they cited Neil Armstrong’s reticence and few public appearances to be proof he was hiding something. Simultaneously, Buzz Aldrin’s high public profile, including his decking of a conspiracy theorist, was evidence that he was feeling the heat of the hoax coming undone.

The only way hoax proponents could possibly be convinced is if they were sent to the moon themselves. I’ve heard worse ideas.