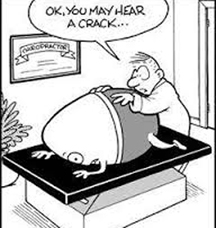 Most patients seek out chiropractors because their back hurts. There is some evidence that chiropractics can be effective in the short-term relief of lower back pain, although Advil and a massage may work just as well.

Beyond this limited and narrow focus, chiropractics has never been proven effective in treating or preventing any disease or symptom. Despite this, some chiropractors claim to be able to cure or mitigate a wide range of maladies that have nothing to do with the back. The theory is that since the spine is the center of the body’s nervous system, twisting and turning the back in different ways and places will be beneficial to overall health.

Like many pseudosciences, chiropractics uses medical-sounding terminology to impress and confuse the uninitiated. The most common phrase associated with the practice is “vertebral subluxation.” Subluxation is a real medical condition and refers to a partial dislocation of a joint. But Vertebral Subluxation Theory holds that misaligned vertebrae are the cause of disease. There exists no medical evidence to support this position. Furthermore, it leaves the patient vulnerable to repeated visits for “subluxation correction” as a preventive measure, although what it is meant to prevent is unclear.

Whereas chiropractors will forcefully push, pull, and turn a person in all directions, Reiki practitioners won’t touch the patient at all. Hands are just moved around the body in various patterns and speeds. Reiki asserts that all hands have natural healing energies, but that some persons’ hands have more healing power than others. The percentage of those with the extra power squares precisely with those who have paid $350 for Reiki training.

The original Reiki man was Mikao Usui. He ascended to a Japanese mountaintop, fasted, flipped through some sacred texts, and came tumbling down with healing energy powers. Usui was kind enough to pass his powers onto others for a price. Those who received this healing ability could then do the same for others. This energy has to passed on linearly, so don’t try to bypass the process by going up on the mountain yourself.

A person who went through the process of having the magic energy transferred described it thusly: “The instructor grasped my palms with hers, and lifted my arms above my head and we went in a circle. Then she patted my crown three times, whistled a strange tune, and touched my back.” I have also undergone this experience, although I called it Ring Around the Rosie and Duck Duck Goose.

Reiki teaches that the energy possesses an advanced form of intelligence, and can serve as cosmic doctor and surgeon. It is thus able to diagnose and heal the patient. This is handy for the 100 percent of Reiki practitioners who have no medical training.