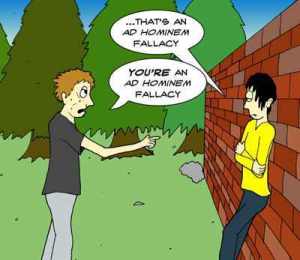 Today’s critical thinking spotlight focuses on how to spot bad arguments. This refers to bad arguments as a form, not the arguments themselves. This takes no position on any issue, and people of all opinions are susceptible to poor logic and false conclusions. This list is not comprehensive and the examples cited are not the only possible manifestations on the particular bad argument type.

Personal attack. This is a somewhat debatable inclusion, as it may not even rise to the level of bad argument.  “Screw you, you’re an idiot,” or more ironically, “Screw you, your an idiot,” might as well be saying, “I concede.” It adds nothing to the debate and will bring no one to your side. This is the one bad argument everyone recognizes, so we need spend no more time here.

Ad hominem. These come in many forms, but it is primarily shifting the debate from the argument to the person making it.  These can sometimes be closely related to the personal attack. If Joe uses statistics and studies to call for an increase in the minimum wage, an ad hominem response would be, “Where did you get your economics degree?” Joe’s level of economic education is irrelevant to the legitimacy of his point. Similarly, someone may attack the person’s incentive, rather than the policy. “You don’t care about the tax money or the environment. You just want marijuana to be legal so you can smoke it.” Again, this fails to address the point made.

Circular reasoning. This is using the conclusion as your premise. When the Kansas Jayhawks won the conference for the ninth straight year, an acquaintance of mine claimed this dominance was a sign of the Big 12’s weakness. I responded that, of 35 conferences, the Big 12 had ranked between first and fifth in the Ratings Percentage Index in each of those nine seasons. Furthermore, there had been 48 Tournament games won by Big 12 teams other than Kansas in that time. KU continued its run the next year, a season in which the Big 12 topped the RPI and sent 70 percent of its teams to the Tournament. The acquaintance, however, continued to use his conclusion that KU’s dominance was a sign of the Big 12’s weakness to support his premise.  His argument consisted of nothing more than, “We know Kansas won a bad conference because Kansas won the conference.”

Argument from consequences. We’ll keep with the sports theme for just one more, I promise. Major League Baseball’s free agency era began when an arbitrator struck down the way it applied its reserve clause. The players’ attorney had the legal and historical evidence on his side. MLB’s lawyer conceded this, but pleaded, “If this happens, the wealthiest teams will dominate and it will be bad for baseball.” Maybe so, but the consequences of it happening were irrelevant to the case being arbitrated. This flawed argument makes its points on the possible results rather than the facts.

Appeal to ignorance. This is very common among conspiracy theorists. It is often prefaced with phrases such as “There is no way that…,” or “This can only mean…”. It asserts there can only be one conclusion. It further assumes an argument, no matter how tenuous, has to be true because there is no argument against it. For instance, the conspiracy theorist may show a picture of reporters at a mass shooting, and if one of them is smiling, will write, “There is no way someone would act like that if they were at the scene of a mass murder.” This appeal to ignorance presents absence of evidence as evidence of absence. In other words, because I can’t show why a person would be smiling in this situation, it means the shooting was a hoax. This is flawed thinking because the burden of proof always lies on the person making the claim. One of my favorite exchanges involved a man saying, “There is no way I can believe it’s possible to put a man on the moon.” The response: “That’s why you’re not a physicist.”

Equivocation. This is when two meanings of a word are used within the same argument. “Man” can refer to males or to homo sapiens. An equivocation conclusion would be, “Sharks are man-eaters, so they are no threat to women.” A similar tactic is inventing one’s own definition of a word in order to support a position. “A minority cannot be racist because racism is institutional control of a privileged set over the oppressed.” No, racism is the belief that all members of a race possess characteristics or abilities that distinguish it as superior to other races.

Strawman. This is making up a false, usually ridiculous, opposing position in order to attack it. Failed House of Representatives candidate Christine O’Donell insinuated that evolution proponents think monkeys can give birth to humans. This is a substantial mischaracterization of evolution, which posits that man and apes have a common ancestor.

Guilt by association. Pointing out that Stalin was an atheist or that Lord’s Resistance Army members are Christians, as a point against atheism or Christianity, are arguments of no value.

False conclusion. This was most entertainingly demonstrated by my high school economics teacher. “All dogs bark. Johnny barks. Therefore, Johnny is a dog.” This uses two accurate statements, but arrives at an incorrect ending.